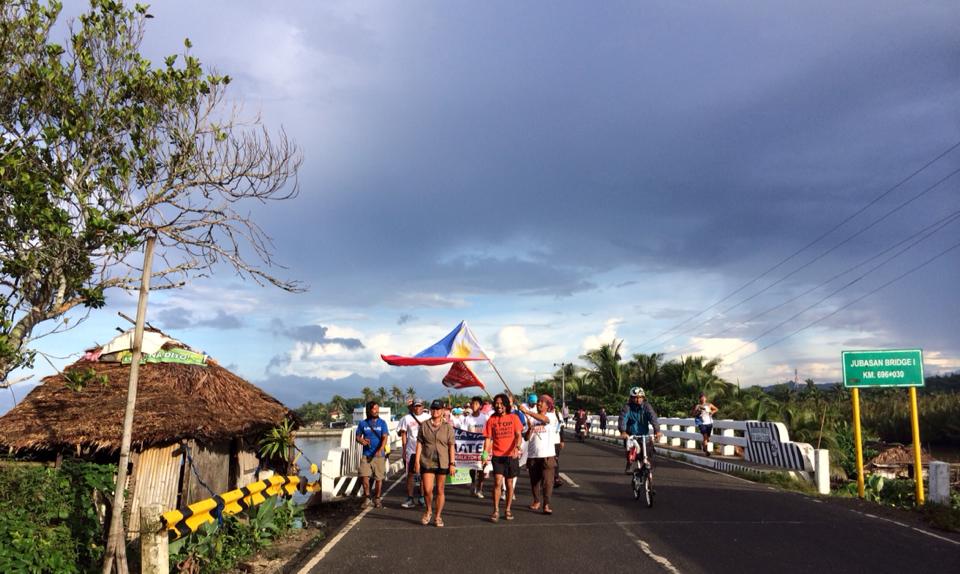 Last year, then commissioner of the Climate Change Commission Nederev “Yeb” Saño went on a 1,000km walk from Manila, kilometer zero, to Tacloban, ground zero. It was called the Climate Walk: A People’s Walk for Climate Justice. The goal was to make local governments commit to better disaster risk reduction and climate change adaptation and at the same time, make an impact in the international talks by showing global leaders the things that people in the Philippines go through with climate change impacts. The walk lasted for 40 days, with the team arriving in Tacloban on November 8, the same date typhoon Yolanda hit the city the previous year.

The Climate Walk team was composed of different organizations, Dakila being one of them. Each organization had some representatives walking most or the whole 1000km leg, which made up the team of core walkers. For Dakila, it was our climate campaigner Nitya Saulo who was also the “alpha walker” or the lead walker. She was joined by Charley Sta. Maria who documented the walk and visual artist AG Saño, who is also Yeb’s younger brother.

I first joined a leg in the province of Quezon, a short 10km walk to the municipality Calauag. We were there to visit other Dakila members and talk to the team about the campaign. We assured them of support when they needed it. It was then that the idea of me joining the walk from Bicol to Samar for 10 days was decided. I was to go with the team to help document not only the walk but most importantly, the communities that we were going to pass by, for these were communities most affected by disasters.

The Dakila team leaving the island of Luzon crossing the sea to Allen, Samar

But the 10-day assignment eventually became 18 days. Before I knew it, I was with the Climate Walk for 500km, slept with them in public school classrooms and city halls, bathed in whatever makeshift bathroom there was, and listened to stories of different people and saw, with my own two eyes, the devastation brought by climate change impacts.

And in my 18-day and 500km journey by land and sea, here are the most important things I learned:

1. Filipinos have a great sense of humour even during disasters but this doesn’t mean disasters are a laughing matter. Disasters leave people without decent livelihood and homes.

Nanay Valentina and her house

In Veriato, Samar, I met Nanay Valentina. I was standing in the street corner when she saw me and said jokingly, “Tutulungan niyo ba kami? Sira pa yung bahay namin.” (Are you here to help us? Our house is still in ruins) I followed her back to her house where she showed me their makeshift roof made of plastic and tarpaulins. She said, “Yung bahay namin, nasira nung Yolanda (Haiyan), nasira ulit nung Glenda.” (Our house was destroyed by Yolanda and was once again destroyed by Glenda) As the day turned to night, Nanay Valentina escorted me to the sari-sari storenext to her house and explains they have not had electricity for some time. She does not have enough money to pay for it, she said. Let alone pay for the repair of their house, I thought.

Nanay Vicky and her piggery

Nanay Valentina introduced me to her friend, Aling Vicky, 58 years old. She recalled the time when typhoon Glenda (Rammasun) hit them, “Bumaha hanggang leeg. Sabi ng kaibigan ko, ‘yung mga baboy mo lumalangoy na rin!’ Pinuntahan ko yung ma baboy ko, totoo na palang lumalangoy!” (The flood went up to our necks. One of my friends told me, ‘your pigs are already swimming!’ So I went to my piggery and it was true, my pigs were swimming!) She recalled the experience while showing me her piggery which was still wrecked four months after the typhoon.

2. We put band-aid solutions where there should be long-term solutions. We cannot answer climate change with band-aids, no matter how much of it we put to cover the problems.

During the Climate Walk, we slept in public schools, churches, and covered courts, which as we know are turned into evacuation centers whenever there are typhoons. However, these are also not disaster ready. We need to have real evacuation centers which are disaster resilient and inclusive for women, children, elderly, and persons with disability.

The Climate Walk team slept in a covered court which was used as an evacuation center in Basey, Samar during Yolanda (Haiyan)

When asked if they evacuated during typhoon Glenda, Ofelia Galitan from a coastal community in Samar, said, ”Hindi, sa bahay lang kaming lahat. Wala naman kaming mapuntahan. Yung eskwelahan, malapit din sa dagat, yung simbahan sira.”  (No, we were just at home because we had nowhere to go. The school where we usually evacuate is also near the sea, the church was also destroyed.)

3. Education and information are very important in climate change adaptation.

Irosin, Sorsogon has a Climate Field School and their very own Climate Information Center where they track rain and even study different rice varieties to help farmers adapt to changing weather patterns.

Ate Nimfa, one of the women in-charge of the Climate Field School, said, “Laging nagtatanong ang farmers kung kailan uulan. Kapag hindi nila alam ang lagay ng panahon, hindi nila alam ang itatanim. Kaunti ang ani. Ngayon, mas alam na nila ang itatanim, mas marami ang ani.” (Before, farmers always asked when it was going to rain. If they did not know the weather, they didn’t know which crops to plant and so their yield would be low. Now that they know how to track the weather, they know which crops to plant and they have more yield.)

4. Filipinos help each other out even if they themselves have little to offer. This is our bayanihan spirit, our collective action. This is a trait we must use not only to overcome every disaster but to build resilience in every community in the face of climate change.

The story of Climate Walk is the story of every Filipino. This is the reality we face everyday. We must work together for climate action because only when we work together can we face climate change without breaking our spirit.