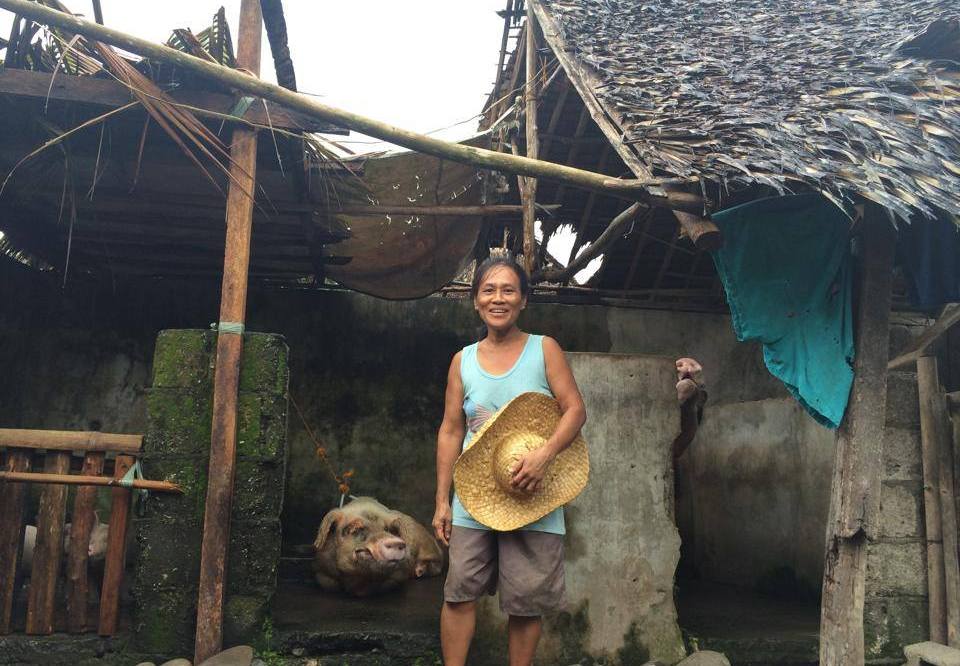 Tutulungan niyo ba kami? (Will you help us?)”

Two women asked as they passed by me on the streets of Veriato, Samar. I asked why.

“Nasira ang bahay at kabuhayan namin sa Glenda (Our houses and livelihoods were destroyed by Typhoon Glenda),” they said.

“Tinapalan na lang namin ng plastic at tarpaulin dahil wala naman kaming pampagawa (We just used plastic and tarpaulin as a makeshift roof because we have no money to fix it),” she said.

Aling Vicky then showed me what was left of her piggery, laughing as she recalled her experience.

(Ma’am, the floods went up to my neck. When my neighbor saw me, she said, ‘Your pigs are swimming!’ I went to my piggery and saw that my pigs were really swimming!)

Aling Vicky was able to save 3 of her 6 pigs.

Much laws, no teeth

Veriato, Samar, like many other communities in the Philippines, is a coastal community vulnerable to climate change impacts such as extreme weather events. It was one of the towns hard hit by Typhoon Glenda (Rammasun).

The vision of the PDP is to create “an environment that is healthy, ecologically balanced, sustainably productive, climate change resilient, and one that provides for present and future generations.”

In the 6 years of the Aquino administration, the Philippines was battered by strong typhoons such as Pablo (Bopha), Sendong (Washi), Yolanda (Haiyan), Glenda, and Ruby (Hagupit). Every year, we experience one or two extreme weather conditions, and every year we realize we are still unprepared for climate impacts.

Yes, certain laws such as the Climate Change Act and the People’s Survival Fund (PSF) have been passed to help communities adapt to climate change, but their implementation is another story.

The PSF is said to be fully operational by August, according to the Climate Change Commission (CCC). This is 3 years after it has been enacted into law. In those 3 years, how many lives could have been saved if communities had access to the fund that will help them strengthen their adaptive capacities? Could it have prevented the scale of Yolanda’s devastation?

And while we have always been on the list of countries most vulnerable to climate change, what has the administration done to address mitigation of carbon emissions? We have been asking other countries to cut down on carbon emissions but here we are, continuously investing in coal fired power plants.

We have a president who, in his 2013 SONA, said, “Did they happen to mention that renewable energy is also more expensive – from the cost of building the plants to the eventual price of energy? Did they mention that it cannot provide the baseload – the capacity required to make sure brownouts do not occur? If you put up a wind-powered plant, what do you do when there is no wind? If you put up a solar plant, what do you when the sky is cloudy?”

So while other countries such as Morocco — also a developing country but committed to an ambitious target of 42% renewable electricity generation by 2020 — have pledged to lessening carbon emissions, the Philippines continues to invest in dirty energy.

Six thousand deaths in just one typhoon and 42 coal fired power plants in the works, how sincere has this government been in addressing climate change?

“Ma’am, sana makarating itong kwento ko sa mga tao para may gawin na sila (I hope my story will reach many Filipinos so that the government can finally do something about our situation),” Aling Vicky said.

The sun has set when we finished talking. Aling Valentina walked back to her house with its damaged roof. It was dark, there was no electricity. Aling Vicky started preparing food for her family.

At the end of everyday, the government has no one else to explain its climate inaction to but to the likes of Aling Valentina and Aling Vicky whose lives have been damaged because of climate change impacts.

This article was originally published in Rappler.