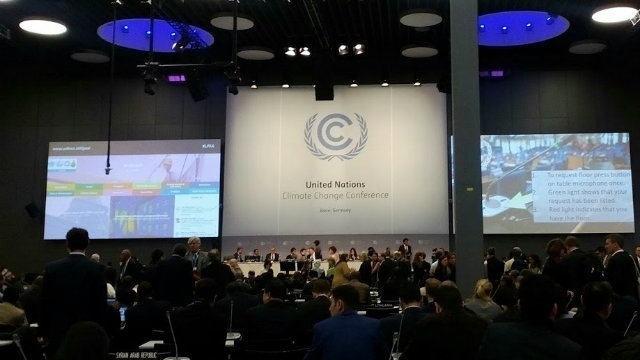 Bonn, Germany — The first day of the climate negotiations in Bonn saw much frustrations from different countries on the draft negotiating text done by the co-chairs of the negotiations. The draft is supposed to be based on the past negotiations but saw nothing of those reflected in the current text.

“The text went too far in eliminating options. What was discussed in September was not accurately reflected in this text. Whatever outcome of this negotiations would be, it should reflect what was already talked about last September,” Antigua and Barbuda said.

The G77, Alliance of Small Island States, and Like Minded Developing Countries (LMDC) negotiating blocks also made a strong statement against the current text.

“The text is imbalanced and lopsided,” says South Africa who speaks for G77 plus China.

“It disadvantages and excludes the large part of the world,” adds Malaysia, who speaks for LMDC negotiating block.

Maldives, meanwhile, called the text an “injustice done to the member states of the constituency.”

The text has been called the #UStext by civil society and environmental groups as it seemed to favor the wishes of developed countries like the United States (US) more.

Developing countries have long fought for climate justice by ensuring that things such as loss and damage and common but differentiated responsibilities (CBDR) are included in the text.

Last September, Dominica, who was suffering from the aftermath of typhoon Erika, said that “having no clarity on loss and damage is equivalent to injustice and climate denial.”

CBDR, on the other hand, is a principle that says all countries are responsible for addressing climate change but not on an equal level. It recognizes that some countries have had significantly more carbon emissions that has allowed them to develop as a nation as compared to others.

Developed countries like the United States and the United Kingdom are known to oppose loss and damage and CBDR.

But it is not only developing countries who are not happy with the text. The EU is also said to be disappointed with the minimalist text and called it “not a good starting point” for the nehgotiations.

Seeing these frustrations, insertions to the text by countries and negotiating blocks have been allowed by the co-chairs in order for negotiations to move forward. These insertions are the “absolute must-have’s” without which negotiations will be at a deadlock.

Some of the insertions include the addition of human rights, women and gender rights, and indigenous people’s rights into the preamble. These were inserted by countries like Mexico, the Philippines, and Bolivia.

According to the United Nations Human Rights Council in a UN Resolution last 2008, climate change “poses an immediate and far-reaching threat to people and communities around the world and has implications for the full enjoyment of human rights.” In addition, another study made by the Office of the High Commissioner for Human Rights (OHCHR) in January 2009 said that global warming “will potentially have implications for the full range of human rights.”

This week of negotiations will be crucial in laying down the foundations of a strong climate agreement in Paris. Countries are eager to move forward and ensure that the failure of Copenhagen to deliver a climate agreement in 2009 will not happen again this year in Paris. The question is: are all countries ready to negotiate and make concrete decisions in the next four days? Or will there be all talk and no action, like what we have seen in the past years?

Article was originally published in Oximity.