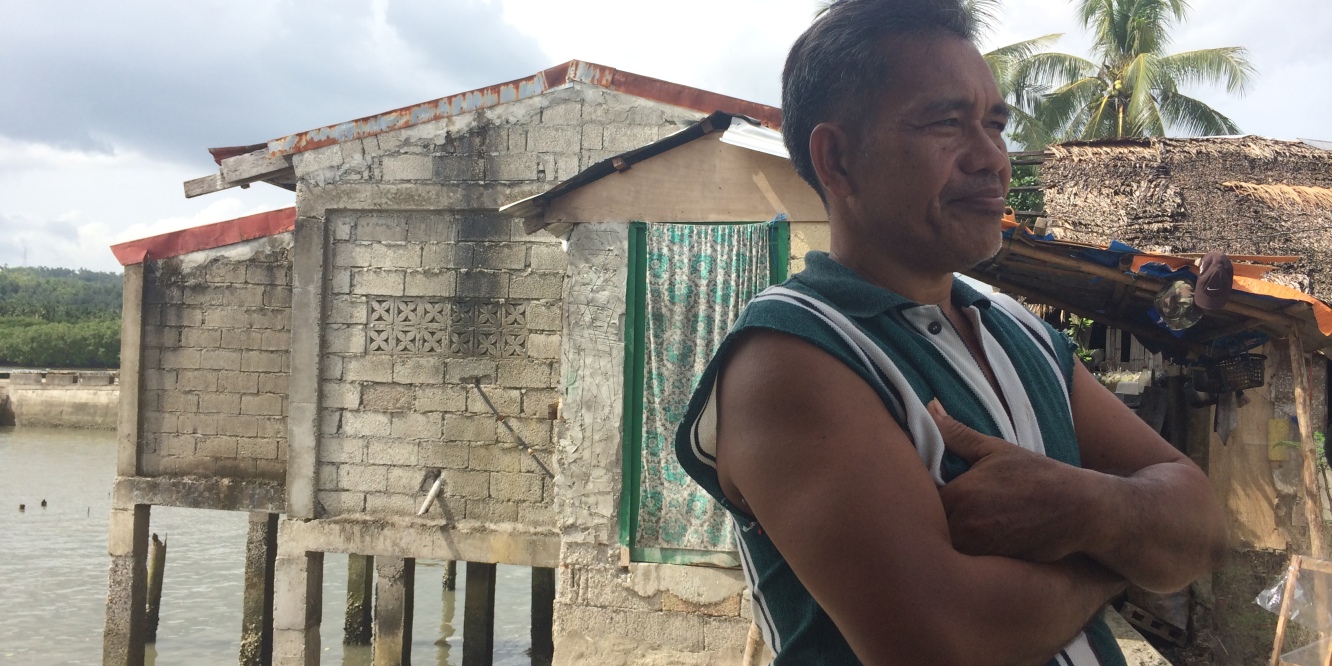 “Are you really walking all the way to Tacloban?” a woman in her 60s asked me as I was waiting inside the St. Peter and Paul cathedral.

I was in Casiguran, Sorsogon, on my first day of Climate Walk, the 1,000km walk led by then climate change commissioner and climate negotiator Naderev “Yeb” Saño. We were commemorating the victims of typhoon Haiyan, which devastated the Eastern Visayas region of the Philippines.

She introduced herself as Teresita Flores, 62 years old, who lived in Samar, near the San Juanico bridge. She was there when the storm surge happened as Haiyan made its landfall. She and her husband survived, but not their livelihood.

“We have lost all our coconut trees. There is no money in Tacloban and Samar right now so I decided to leave and look for a job in Bulacan, with my former employer,” she said. She was unsure if her former employer would accept her but she was willing to take the risk.

Teresita relied on the kindness of people who lent her money on the way and one bus driver who allowed her to board the bus without a ticket. She has reached this far, a ferry and a bus ride from Samar.

But on the day we met she was running out of luck so she decided to ask help from the church. “The priest is a good person. He will help me get to Bulacan,” she said. Bulacan is still some 300 kilometers away from Sorsogon.

Lilia Majestrado, 49, a teacher from Victoria National High School, was one of the teachers that greeted us as we walked towards the town of Victoria, Samar.

To get to school, students of Victoria who live inland go through a bridge that overflows when there is continuous rain or typhoon. Teachers like Lilia serve as the students’ safe-keeper, especially during typhoons, ensuring everyone gets to school and goes back home safely.

“We will be the ones who will get wet and drown in flood when the typhoons come and we are still required to go to class,” said Lilia. “They told us they will build a high school building up in the mountain so that the students would not have to walk to the city.”

Franz, 58, a fisherman whose family has always lived on the coast, also joined us in the walk in Samar. “We have less fish to catch now, and every time it rains, we are also always worried the waves will wipe us out,” he said.

“Ma’am, he’s homeless now,” said a market vendor in Motiong, Samar, pointing to a man who they say has lived in a makeshift waiting shed made out of bamboo and tarpaulins, with a bench he has made into a bed.

His name is Lando and his house was swept away by typhoon Glenda (Rammasun). The only thing left of his house was a wall of what used to be his bathroom. It is here where he has built his waiting shed and where he eats, sleeps, and takes a bath.

The local government has asked Lando to move away from the shore to a new housing facility for a price of 800 pesos ($17). But he does not have enough money to feed himself everyday, let alone pay for a house.

Teresita, Lilia, Franz, and Lando are four out of the millions of Filipinos affected by climate change and its impacts.

They do not know the science nor the data of climate change. They do not know about the UN’s Conference of Parties (COP) and that the course of global warming is being decided by a few leaders. But here is what they know: their lives are no longer the same.

With COP21 just around the corner, we are seeing more countries submit their intended nationally determined contribution (INDC) to the United Nations. The INDC is a set of commitments by each country which serves as their contribution to creating a climate-resilient future.

The Philippines, one of the most vulnerable countries to climate change, has yet to publish its INDC. On 24 July, the Climate Change Commission opened its consultation to civil society. However, the process of the consultation remains to be questionable.

Gene Ferrer, National Coordinator of Aksyon Klima, a network of 40 civil society organizations in the Philippines working for climate action, says the process was not at all transparent.

“There was no real consultation that happened that included Civil Society Organizations (CSO). When they called us, they said they have already consulted with government agencies and the business sector and that there is no need for us to submit recommendations. We feel that the civil society voice is not welcome to the table,” Ferrer said.

To exclude civil society is to exclude farmers who have lost their crops to El Nino and La Nina.

To exclude civil society is to exclude fisherfolks who no longer have enough fish catch due to warmer waters.

To exclude civil society is to exclude every Filipino who has lost a loved one, a home, a livelihood for every strong typhoon that has come our way.

To exclude civil society in the process of the INDC is to exclude the voice of the people, those who are most affected by climate change impacts.

At this point, the Philippines’ INDC is clearly unambitious, insincere, not transparent, and non-inclusive. The commitments we have made are commitments straight out of our noses, something seemingly done just because we are required to commit something.

Until then, we are only betraying our countrymen who have already suffered and are currently suffering from climate change impacts.

Our government may have failed us in the INDC process but the civil society sector will continue our fight for climate justice. We are open for a dialogue but we are also not afraid to hold our government accountable. We can work with the business sector but we will remain staunch in the fight against coal and fossil fuel.

The government must not forget that we are here and we will seek justice for every Teresita, every Lilia, every Franz, and every Lando who have been victims and survivors of climate change impacts.

The Climate Change Commission and Secretary Lucille Sering were contacted for comment but had not replied at time of publication.

This article was originally published in RTCC.