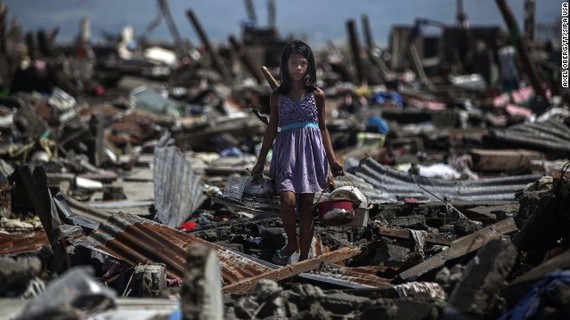 Many countries in Asia are extremely vulnerable to climate change. For this reason, the Conference of Parties (COP) 21 which will be happening in December is crucial to the survival of millions in this part of the world. Countries who are part of the COP21, after more than two decades of negotiations, are expected to come up with a legally binding climate agreement. This agreement is expected to help countries adapt to climate impacts and at the same time, curb global warming through carbon emission mitigation.

Many countries in Asia are facing climate change impacts. The Philippines and Bangladesh are two of the most climate vulnerable nations of the Asia Pacific.

The Philippines is one of the more severely impacted countries because of its geography and its lack of finance and capacity to adapt to climate change.

Located at the typhoon belt, the Philippines experiences an average of 20 typhoons in a year. However, due to warmer sea waters, typhoons have become stronger in recent years. In fact, the government, through the Philippine Atmospheric, Geophysical and Astronomical Services Administration (PAGASA) has just decided to create new categories for stronger typhoons.

Before, the strongest were categorized into “signal no. 4” with wind velocity 171 to 220 kph within 12 hours. However, Haiyan, the strongest typhoon to make landfall in history, made landfall at 313 kph. This killed more than 6,000 people.

More than a year after Haiyan, PAGASA created category “signal no. 5” for typhoons with wind velocity of 220 kph or more within 12 hours. This new category are supposed to help more Filipinos understand the strength of the typhoon and aid in better preparations, something which lacked during Haiyan and one of the reasons why the death toll was too high.

Bangladesh is often considered a poster child for the impacts of climate change. A combination of its flat deltaic topography with low elevation, heavy dependence on agriculture, high population density and incidence of poverty make it particularly vulnerable to climate change.

In addition to inundating the houses and lands of millions of people living in Bangladesh’s low lying areas, projected sea level due to global warming will destroy Bangladesh’s UNESCO heritage site and the world’s largest tropical mangrove forest the Sundarbans, which supports the livelihoods of people from many neighboring districts, and is the home of the Royal Bengal Tiger.

With climate change induced increasing frequency of floods, droughts and salinity ingress, the country’s agro based economy is taking a hard hit. Farmers’ whose produce are dependent on predictable patterns of wind and monsoon are incurring heavy losses due to the changing weather patterns. Around a thousand square kilometers of cultivated land and sea product culturing area will likely turn into salt marsh.

While Bangladesh has been a hotbed of cyclonic events, two major cyclones Sidr and Aila taking place within a very short period wreaking unprecedented havoc, is anomalous from the past. More frequent and devastating cyclones, storm surges and river bank erosion are not only causing widespread damage to people’s lives, properties and livelihood, but also leading to displacement and creating climate refugees.

For countries such as the Philippines and Bangladesh, policies such as finance for adaptation and loss and damage are policies that need to come out strong in the climate agreement. However, these issues remain a difficult battle as developed countries try to take as little responsibility as possible in the agreement.

Finance for adaptation is important to help developing countries adapt to climate change. Bangladesh for instance has established a strong national strategic framework for tackling climate change and set up the Bangladesh Climate Change Trust Fund using $100 million of its own funds. While Bangladesh currently funds 80% of its adaptation programs domestically, internal funding of this resource constrained nation is highly inadequate in the context of exacerbating impacts of climate change, so access to international climate finance is crucial.

The Philippines, has a similar mechanism with Bangladesh. It has its own national adaptation fund amounting to approximately $23 million. However, according to the World Research Institute, the Philippines and other developing countries must spend $28 billion per year by 2030 to adapt to climate change.

In this context the issue of easing the barriers to accessibility of international sources of climate finance for developing nations needs to be addressed at the Paris negotiations.

Climate compensation from loss and damage and finance for adaptation are taken as two different forms of finance for developing countries. These are also two policy issues rich countries have been avoiding.

Many countries in Asia will be looking forward to a strong climate agreement in December, that incorporates provisions for loss and damage and adaptation financing for vulnerable nations such as Bangladesh and the Philippines. While Paris will not be panacea, it is a crucial checkpoint towards the path to a sustainable future for humanity. Veering off guard here by failing to make a binding treaty can make all future efforts too little and too late.

We cannot afford to fail in Paris. A failure of a strong agreement in Paris is a failure for millions of people already fighting for their lives.

One Reply to “Asia Needs Strong Climate Agreement to Survive”