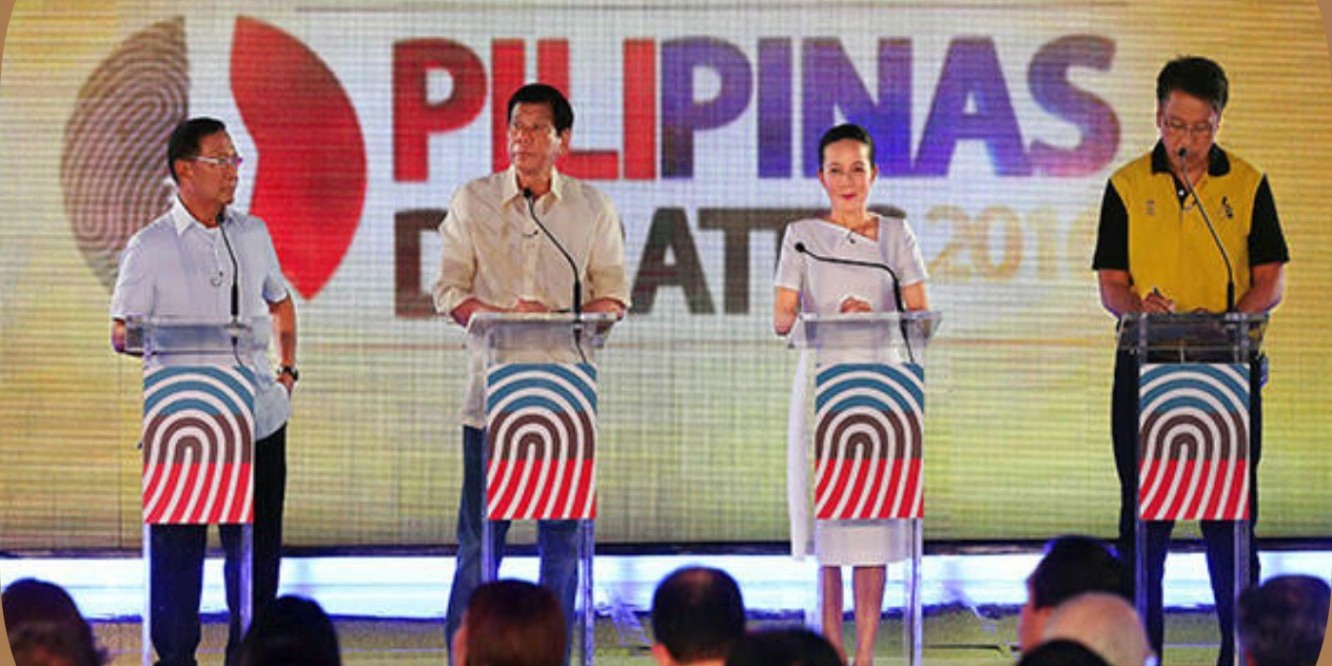 MANILA – The second presidential debates held last Sunday tackled one of the most pressing issues of our time: climate change. We’ve heard and experienced it all before — the Philippines suffers the most due to climate change impacts. So it is but necessary to put climate change as one of the priorities of the next president, something which the present administration clearly has not done so well in.

While the Philippines is a signatory to the Paris climate agreement and was, in fact, one of the key players in the climate negotiations held last December, it is also true that the country has kept its addiction to coal. There are more than 50 approved coal power plants intended to be built in the next 5 years. The Philippines promised a 70% reduction of carbon emissions by 2030. How the government plans to implement this commitment remains a question not clearly answered.

The debate held last Sunday was a chance for presidential candidates to clearly state their positions and action plans on climate change and disaster risk reduction.

The question posed to the candidates zeroed in on the country’s Intended Nationally Determined Contribution (INDC), the commitments we made as a country to the United Nations, and how we plan to mitigate carbon emissions given the number of coal power plant projects approved by the government.

Duterte called the United Nations a hypocrite, said the Philippines shouldn’t have the responsibility of lowering carbon emissions because the country is a low carbon emitter compared to others. Duterte even said that climate change “shouldn’t even be discussed.”

What’s more disconcerting is Duterte’s insisting that we need coal. But maybe it’s not so suprising given his ties with Aboitiz, a local company that keeps on investing in coal fired power plants. Earlier this year, Aboitiz opened a new coal-fired power plant in Davao, approved by Duterte himself. This is worrying given that Duterte has been topping the polls. Will all of the hard work in Paris be put to waste if he becomes president? How many more coal power plants will be approved if he is put in power?

Given a chance to rebut, here’s how Duterte’s rivals reacted:

Jejomar Binay kept silent on the issue itself, but at one point, simply chided Mar Roxas, doubting he can do what he planned on energy and climate because of his penchant for “analysis by paralysis.”

Grace Poe, on the other hand, said she supported renewable energy but was concerned about expensive electricity. She focused more on adaptation than mitigation, saying she will relocate people from vulnerable areas.

Mar Roxas wants to open the Electric Power Industry Reform Act (EPIRA) to increase the percentage of renewables from the current energy mix.

If there’s one thing that was clear, it’s that these candidates do not know climate change and much less, how to address it. Thousands of lives are lost every year because of extreme weather events. El Niño coupled with global warming has worsened drought and is bringing threats to food security. Coastal communities are threatened with sea level rise, which was recently found to be four times more in the Philippines than the global average.

It is alarming how climate change is still not a priority of any of the presidential candidates. Sure, there are other pressing issues like poverty and governance but we can’t fight for equality and transparency if we no longer have land to live in.

The development we should seek should not be similar to the development taken on by rich countries. Development fueled by dirty energy is development that is not sustainable and puts the population at risk. We already know the consequences of investing in dirty energy, why take the same path? For decades we have tried to develop by going against nature. Look where it’s brought us now. It’s high time that we no longer separate environmentalism from development. Taking care of the environment is development.

Last Sunday’s debate will be known as the presidential debate where no one stood up for the planet. Will any of the candidates still change their positions? Will any of them take climate change seriously? Because we have already lost a lot — of lives and of livelihoods — and many more are threatened. We could not afford to lose more.