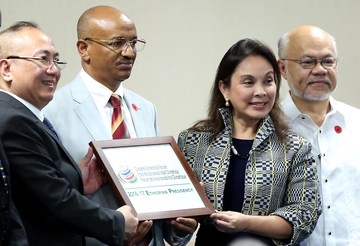 Manila, Philippines — Ministers of the Climate Vulnerable Forum (CVF), a group of developing countries susceptible to the negative effects of climate change, addressed the Philippine Senate on August 16 and presented how limiting global warming to 1.5 degrees Celsius would impact economies.

During the forum, climate scientists and development experts stressed the importance of working together to attain the goals of the Paris climate change agreement.

Senator Loren Legarda, chair of the Senate Committee on Climate Change, stressed the need to develop economies sustainably, but cautioned not to “let our respective economies grow in ways that led us to today’s climate crisis” however small the countries’ contributions are to carbon emissions.

Philippine President Rodrigo Duterte earlier said that he will not honor the Paris climate change agreement, citing reasons of industrialization and the negligible carbon emissions of the country.

He has since softened his stance, saying that he is willing to talk about the historic deal if it takes into consideration the economic plans of the country.

Efforts to limit the temperature increase even further to 1.5 degrees Celsius were a product of the CVF’s advocacy campaign at the climate negotiations in Paris.

“Small island developing states (SIDS) and climate vulnerable countries were the least influential in determining the outcome the negotiations. We were always the ones that needed to compromise,” said Climate Analytics senior climate diplomacy advisor Dr James Fletcher , who is from the Caribbean country St Lucia.

Small island states were the first to demand for a 1.5 degrees target in 2008. The negotiating block Alliance of Small Island States (AOSIS), after having commissioned a scientific study on a 2-degree global temperature rise and learned of its disastrous impacts, decided to support the more ambitious 1.5 degree goal. However, most other countries did not believe this to be realistic.

Seven years after, the tune has changed in favor of the vulnerable countries. In 2016, all 196 countries agreed on the ambitious temperature goal.

Difference of 1.5 and 2 degrees

For countries such as St. Lucia and the Philippines, the difference of a 0.5-degree warming can mean life or death. Currently, the world has warmed at 1 degree Celsius. Catastrophic events such as typhoon Haiyan happened at 0.8 degrees Celsius of warming.

Other small island states such as the Marshall Islands and Kiribati have started to buy land from other countries and to relocate their people as sea levels continue to rise, caused by the melting glaciers.

According to the Low Carbon Report by Climate Analytics, a two-degree rise in global temperature means 98% coral reef loss by 2050, 30% higher sea level rise for small islands in the South Pacific and Caribbean and South East Asia, and longer heat waves in tropical regions.

This will also have economic impacts such as occupational health risks, loss of lives, and community displacement. These impacts will be felt most by vulnerable countries.

Scientists have warned that current country commitments to the United Nations are not enough to curb warming to 1.5 degrees Celsius. However, for vulnerable countries where increasing temperature is a matter of survival, this is a challenge they would take on without any hesitation.

At the forum, the Philippines has handed over the presidency of the CVF to

The senator also posed a challenge to the new DOT and DOE secretaries, saying the Philippines needs energy that is affordable, sustainable clean and inexpensive, and transportation that is efficient, reliable, convenient, and inexpensive. Energy and transport are industries that produce the biggest emissions in the country.

“Bending the global warming curve is a moral imperative especially for developing countries. We cannot wait for the agreement to take effect before taking action,” she added.

Shiferaw Teklemariam, Ethiopia’s minister of Environment, Forestry, and Climate Change, accepted the leadership reminding all countries that “our unity must be strong and firm.”

“We should not be pointing fingers at each other. Climate change is a problem no one country can solve. We must not stand idle.”