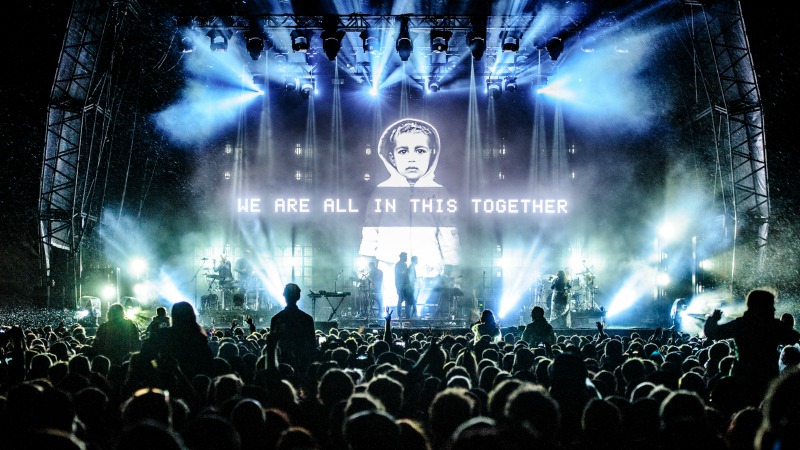 Tyndall Centre Manchester scientists are creating a plan for concerts and tours to have zero emissions, or as close to zero as possible. Massive Attack, who has been working with Extinction Rebellion, approached the scientists to find solutions for the music industry’s live performances. This comes a week after Coldplay announced they would pause touring until concerts and tours become environmentally beneficial.

“Today we’re announcing the commissioning of the renowned Tyndall Centre for Climate Change Research to map the full carbon footprint of typical tour cycles, and to look specifically at the three key areas where CO2 emissions in our sector are generated: band travel and production, audience transport and venue. The resulting roadmap to decarbonisation will be shared with other touring acts, promoters and festival/venue owners to assist swift and significant emissions reductions,” said Robert del Naja, founding member of Massive Attack.

The research will be looking at how to reduce the amount of energy used during concerts and in moving musicians, crews and sets between different venues and cities, as well as the impact audiences have.

“We will be looking where switches can be made to renewable energy sources, how to reduce the amount of energy being consumed but also thinking about how touring could be different. It is a high carbon sector and we need to try and tackle that, because every sector has to be part of the transition to a low-carbon economy,” said Prof. Carly McLachlan, Tyndall Centre Manchester Director.

Live concerts and performances generate 405,000 tonnes of greenhouse gas emissions every year. Thirty four percent of which comes from the venue and 33% from audience travel. Band travel, accommodation, merchandise, and promotions also contribute to emissions.

This article was originally published at Tyndall Centre