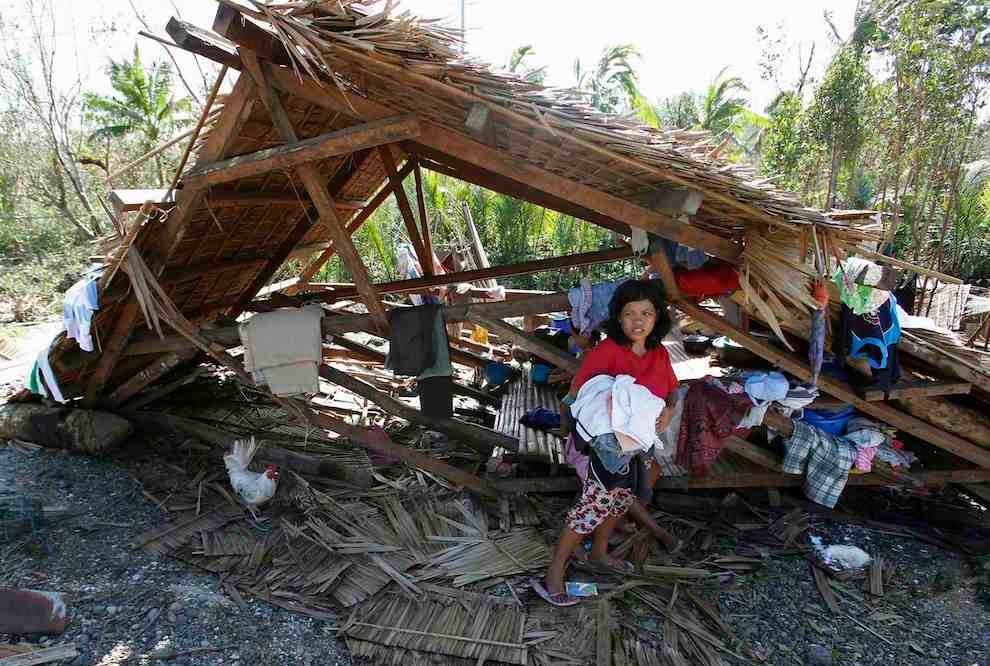 Whether the world’s vulnerable countries should be compensated for loss and damage from extreme events by rich ones mostly responsible for greenhouse gas-caused climate change has taken center stage as an issue at a climate conference in Bonn, Germany, with protesters calling for the concept to become a central part of a climate change agreement slated for December in Paris.

Protesters at the Ad Hoc Working Group on the Durban Platform for Enhanced Action (ADP) 2 taking place this week are demanding that countries that are mostly responsible for climate change because of their carbon emissions, must pay other countries who have suffered or are currently facing problems from climate change impacts.

The issue of loss and damage first blew up in 2013 over the massive destruction caused by Typhoon Haiyan, known as Yolanda in the Philippines, on the Visayas island chain, where more than 6,000 people died and damage ran into more than US$2.6 billion.  An estimated 11 million people were affected by the storm, whose gusts reached 315 kph. In Warsaw, at the conference that coincided with Haiyan/Yolanda, the United Nations Climate Change Conference, known by the shorthand COP19, the UN body established what was called the Warsaw International Mechanism for Loss and Damage Associated With Climate Change Impacts.

Then-climate change commissioner and negotiator Naderev Yeb Sano, put forward the issue asking countries to clearly differentiate humanitarian aid and climate change compensation in context of historical responsibility. But implementation has been slow and bogged down in bureaucratese. It seems clear that the major emitting countries – The United States, China, Brazil and India – want little to do with the idea of helping poorer countries for dealing withthe impacts of climate change “including extreme events and slow- onset events.”

The development of new loss and damage branch does, however, constitute a formal recognition that the impact of climate change as inevitable.  Plans are for mitigation — cutting emissions and issuing targets, and adaptation — making advance preparations such as sea walls, cyclone shelters or developing new, hardy food crops.

But the COP19 text clearly dodged any suggestion that developed countries should contribute according to a formula based on their overall contribution to the increase in greenhouse gases.  Doing so would have constituted an admission of liability, a roadmap for legal action.

Countries were expected to begin delineating their plans for cutting emissions starting in April 2015.

According to Climate Justice Info, the current negotiating text has been divided into three parts: the first part is seen more as legally binding and the ones which should go in an “agreement”, the second part is seen as less legally binding and those which should go in a “decision”, and part 3 contains everything else that is unclear. Part 3 is also called the “graveyard” section of the text. Loss and damage is currently in part 3 of the negotiating text. Consequently, protesters and developing countries like Dominica are pushing for loss and damage to be put back in part 1. However, developed countries are clearly reluctant.

In Bonn, Saleemul Huq from the Responding to Climate Change (RTCC) put the definitions in simple terms where “losses” means “complete loss of something such as human lives, habitats, and species…something that cannot be brought back forever once lost” and “damages” means “something that can be repaired, such as roads or buildings.”

“Our negotiator from UK said she disagreed with loss and damage because we are not the biggest carbon emitter today,” Martin said.

In the meantime, Tuvalu and Kiribati are currently dealing with sinking lands due to sea level rise. And as the climate talks began in Bonn, Dominica was suffering the aftermath of tropical storm Erika. Representatives of Countries such as Bolivia have been frustrated with the developments: “Given the science and urgency, saying we don’t have clarity on loss and damage is equivalent to injustice and climate denial.”

___
This article was originally published in ABS-CBN and Asia Sentinel.